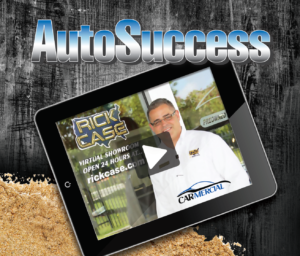 73% of the 11 hours consumers spend online shopping for a car is spent comparing or cross-shopping vehicles. During this time, the average consumer will spend 2 hours performing searches
on the search engines and visit an average of 20 websites before selecting the dealership that will ultimately sell them their new vehicle.

For many dealerships, staying competitive in this environment is a big challenge. However, Rick Case Honda of Davie is not only staying competitive, they are thriving. In 2012, they
implemented a new targeted video marketing strategy designed to increase website traffic and capture more interest from customers driving competitive brands. Today, overall website traffic
is up 100% and their strategy is helping to drive 30,000 visitors a month to their dealership website and has increased Toyota trade-ins by over 400% year-over-year.

When many of us hear numbers like these, we immediately become skeptical. However, the success Rick Case Honda is having with targeted video marketing has been verified by a number
of sources and, to date, they are the only dealership in America to ever be featured in a case study by the world’s largest search engine. Rick Case Honda of Davie is one of the most celebrated dealerships in the country and for good reason. They have been the undisputed Honda champion in the Southeast every year since they opened in 2002. They are America’s largest Honda retail facility, with over 1,000 customers visiting their campus every day. They are the only Honda dealership to win the President’s Award five years in a row and they are currently ranked nationally in Honda’s top five for both sales volume and net profit. This is a high-performance dealership with a long history of excellence and innovation.

“Like it or not, we are in a world that is customer controlled”, says Richard Bustillo, General Manager for Rick Case Honda. “We spend a lot of money on traditional media trying to get customers into our dealership but no matter what we do, customers ultimately go to the Internet where they can consume information on their own terms. This used to frustrate me but now we use this to our advantage.”
A look at Rick Case Honda’s statistics validates Bustillo’s comments. Although 75% of their advertising budget is spent on traditional media like television and radio, 98% of website traffic
and 91% of the 3,000+ calls they receive every month come from a search engine request or from web-based sources that appear when a search is performed. “The strategy we use leverages what we know to be true about our customer’s behavior”, Bustillo continues. “First, we know over 90% of customers are going to shop on the Internet. They’re going to spend 10 to 12 hours online shopping and comparing vehicles and dealerships. Second, we know that in a 30 to 90-day buying cycle, in-market customers are going to do a lot more online than shop for cars. They are going to check the news, watch highlight reels, engage with friends on social media sites and do a lot of other things that have nothing to do with our dealership. Third, we know that customers respond much better to video than they do to text. They are two times more likely to watch something than read something and they are several times more likely to click on video versus text.”

“We knew that if we could find a way to use video where others were using text and find a way to target different types of videos to different audiences, we would have a home run. We expected to
see increases in website traffic and we got that. Unique users rose from ten thousand to eighteen thousand per month and total visits doubled, from approximately fifteen thousand per month to
a little over thirty-one thousand per month. However, what we didn’t expect was the impact this would have in terms of increasing activity with conquest customers. In the twelve months prior
to launching this strategy, we averaged 9 Toyota trades per month. Our average over the last 9 months is 43. That represents a 470 increase in conquest business from Toyota alone.”

The targeted video marketing strategy that Rick Case Honda is using is having a similar affect with other competitive makes as well. However, what is most impressive is the way the different
components of their overall strategy work together to drive results.

Richard Bustillo speaks at the 2013 AutoCon in Las Vegas, NV.

I’m a big fan of Columbo, the TV series starring Peter Falk. But, that’s not what I’m going to write about this week. Instead, I’m going to interview Richard Bustillo, who used YouTube TrueView ads to double the monthly trade-in vehicles at Rick Case Honda, resulting in a 12x return on investment.

Bustillo worked his way up in the dealer world, starting as a salesman. He sold 26 cars in his first month, making more money that month than he’d made the previous year. After working at several dealerships and boosting their performances, Bustillo was invited by auto industry pioneers, Rick and Rita Case to be the General Manager for Rick Case Honda.

Rick Case Honda has a 600,000 square-foot facility in the Miami-Fort Lauderdale area that houses 1,500 new Hondas. The facility includes not only a showroom, but also a state-of-the-art collision center, a gas station, a County Clerk’s Office, and even a barber shop. Yet, Bustillo still saw opportunities to improve the store.

Since April 2008, Bustillo has helped Rick Case Honda generate record breaking sales, despite the tough economy. Much of this is attributed to an emphasis on cross-functional integration, on valued customer experiences, and on Bustillo’s push for Rick Case Honda to adopt better digital and video marketing strategies.

‘You don’t have to be a rocket scientist to figure it out’
In 2011, Bustillo attended the Automotive Leadership Roundtable, where he was exposed to a variety of digital marketing strategies. After returning from the trip, Bustillo started Rick Case Honda on a paid search strategy, before incorporating online video, reputation management, and social media. The marketing team soon found that video advertising converted four times as much as other advertising strategies.

After his early success, Bustillo was asked to speak at a number of automotive marketing conferences. He then met AJ LeBlanc, Managing Partner of Car-mercial.com, who told Bustillo about their unique and scalable video production offerings. Bustillo had already worked with a handful of video vendors and also produced video in-house, but realized Car-mercial.com’s video production capabilities were completely different, and offered an opportunity for growth.

In the fall of 2012, Bustillo and LeBlanc came up with the idea to create YouTube TrueView in-stream ads promoting the distinctive features of Honda to encourage trade-in. That same year, the 2012 Compete Google Automotive Shopping study discovered that 21 percent of vehicle shoppers find online video content about vehicle trade-ins useful for their research process.

After launching the TrueView ads, the dealership doubled the number of trade-ins from a competing make from 10 per month to 20 per month. Rick Case Honda was now earning an incremental $50,000+ for online videos that cost $0.20 – $0.30 per view. Monthly unique site visitors had also increased by over 18 percent. Bustillo says, “That’s targeted video that you can tie back and figure out ROI… You don’t have to be a rocket scientist to figure it out!”

Bustillo also emphasizes the importance of his website as a critical component in ensuring the success of his online video campaigns. He says, “It is important to make sure your website is user-friendly to make sure that when video pre-roll sends traffic to your site, users engage with your brand and then come to your store. It’s all interconnected.”

He adds, “You gotta look at it all the way down the road. When you integrate every department… everyone benefits from video pre-roll… If you only look at it from metrics such as views, that’s very short-sighted. You have to open your eyes and look at everything, so that you can see the full benefit of what you can accomplish.”

‘Oh, uh, a few more questions for my story, sir.’
Using my best impression of Columbo’s investigative style, I thanked Richard Bustillo for his interview and turned to leave – only to turn back at the last second as if I’d suddenly remembered something. Then I politely said, “Oh, uh, a few more questions for my story, sir.”
GJ: Can you tell us why you partnered with Car-mercial.com?
RB: It wasn’t difficult to realize that Video was the next evolution in internet marketing. We wanted to make sure we positioned ourselves with the best company in that space. We felt Car-Mercial produced OEM quality videos that could convert and they did.
GJ: After launching the ads, were you surprised that the dealership doubled the number of trade-ins from a competing make from 10 per month to 20 per month?
RB: I was very surprised. As a car dealer, we are always looking for ways to figure out our ROI. After a few months with Car-mercial.com, we started to notice that an increase in our conquest trades. That was track-able. Now we knew we had ROI.
GJ: Rick Case Honda is earning an incremental $50,000+ a month from online videos that cost only $0.20 to $0.30 per view. How many views do you typically need before you get a trade-in?
RB: When you take into consideration every dollar generated from a trade in (i.e. reconditioning, sale, etc.) we make that and more. What it costs to generate a trade in is another story. It depends on the time of month, the models we’re targeting and the Honda incentives, which varies.
GJ: How do you know monthly unique visitors to your site have also increased by over 18 percent?
RB: That information is based on Google Analytics. I know where everyone is coming from. It’s a simple and fantastic way to get your data.
GJ: Based on your initial success, what do you plan to do next?
RB: I am just figuring out this Video SEO and Pre-roll. Give me a couple of months and get back to me on that question.