Marketers have long viewed Facebook as an online cocktail party — fine for socializing but weak for selling cars. Now that’s changing. Rick Case Honda and other dealerships are starting to take advantage of Facebook’s huge potential to reach customers on the users’ digital home turf, by putting ads directly into their customers’ news feeds.

Technical improvements introduced in September allow dealerships to take their customer lists — with just names and e-mail addresses — and find those people on Facebook. The “custom audience” feature allows dealerships to push ads directly to Facebook users’ news feeds, the must-see center column of the home page that consists of a constantly updated list of posts by a user’s Facebook friends. Facebook users are more likely to look at news-feed ads than those in the more common ad location, the right side of a Facebook page, the social media giant says.

“Facebook is starting to understand what we need to sell cars,” Bustillo said. In June at Rick Case Honda, an employee-pricing-for-all promotion on Facebook contributed to a strong month — 615 new vehicles sold — the most of any Honda store nationally for the month, Bustillo said. Facebook played a key role in the campaign’s success, he said. The store took its customer list with thousands of names and e-mail addresses and identified who were Facebook users. It then delivered to their news feeds the employee-pricing offer, Bustillo said.

Facebook also has improved the ability of dealerships and the factories to put promotional videos in front of car shoppers, Bustillo said. Facebook users are three to four times more likely to click on a video than a static ad, the company has found. Rick Case Honda in 2012 has sold 4,238 new Hondas through Oct. 23, the third most of any Honda store nationally, the dealership said. The knock on Facebook, from a marketer’s standpoint, is that although the huge social media site has been useful for automakers to promote brand awareness, it has been nearly irrelevant in the shopping process.

As recently as May, Dataium, a consulting company that monitors online vehicle shopping behavior, found that of 20 million visitors to dealership Web sites, just 120 arrived there directly from a Facebook link. Of that microscopic number, only a handful left contact information to become sales leads, Dataium found. On the other hand, automakers have been building huge banks of friends and sending them soft sells, such as sponsored stories, that talk about topics such as the environment without a direct pitch for vehicle sales. Jeep, for instance, has more than 2 million Facebook fans.

Viral advantages
In an interview last week, Doug Frisbie, Facebook’s head of automotive global marketing, said Facebook attained the technical capability to put ads on Facebook users’ news feeds in late January. Ads placed there are more than eight times more likely than ads on the right side of a user’s Facebook page to prompt a reader to comment on the item or actively “like” it, Frisbie said. Facebook refers to a user’s interaction with an ad or item as “engagement.” And advertisers are seeing 10 times greater recall from news-feed ads than from static ads, he said.
Bustillo said he likes the news-feed ads because the dealership pays for them only when Facebook users click on them. That’s similar to Google paid search. The ads also have the potential to go viral, Bustillo said. Each Facebook user has on average 130 friends, Facebook said. If a Facebook user shares an ad with friends, it has a multiplier effect of reaching people without additional cost to the dealership. The dealership pays for an ad only when the original audience clicks on it, Bustillo said.
Facebook declined to say how many dealerships or automakers have used the new capabilities to find their customers on Facebook or deliver ads to news feeds. The company is watching for backlash from its users, accustomed to conversing relatively free of advertising, to having ads placed in their news feeds. “We are carefully monitoring user engagement and sentiment,” Facebook COO Sheryl Sandberg said in an earnings call last week. “We look at how users are engaging on our platform, and as we’ve increased the number of ads and news feed we’ve been careful — carefully monitoring that engagement.”

Joe Castle, dealer principal of Castle Chevrolet in suburban Chicago, has matched about 8,000 people on his 14,000-person customer list with their Facebook addresses. In the past three weeks, he sent to their Facebook news feeds an offer for them to buy one oil change and get one free. In the first two weeks, the campaign, which cost him about $500, generated about $12,000 in oil changes and other maintenance, Castle said. Castle Chevrolet pays Facebook about 60 cents when a customer targeted on Facebook clicks on the offer, he said. The store sold about 1,200 new vehicles in 2011.

“Facebook has really dialed it in,” said Castle, who also is founder of Socialdealer, a social media and reputation-management company for dealers. Facebook’s features to target shoppers are evolving, Frisbie said. Within a month, Facebook expects to pilot a program with R.L. Polk & Co. that will allow automakers and dealerships to use Polk’s huge database of owners to identify sales prospects, he said. “We’re talking about getting the right message at the right time in front of in-market shoppers,” Frisbie said.

Target Accord
Rick Case Honda expects to make heavy use of ads and video on Facebook news feeds next year to promote the redesigned 2013 Honda Accord sedan, Bustillo said. The store is waiting to launch the campaign until early next year, though the 2013s are available now, to leave time for the store to clear 2012 models still in stock, he said. When the campaign is rolled out, Bustillo said, he intends to shoot videos to potential customers through Facebook extolling the features of the sedan. Moreover, with the help of campaign consultant Tier10Marketing.com, the store will target Accord customers with equity in their cars so he can offer them a new Accord for the same or lower monthly payments, Bustillo said.

The targeting capability of Facebook makes it an economical media buy, he said. Rick Case Honda spends about 20 percent of a $250,000 monthly advertising budget on digital advertising. Bustillo said he gets his best return on investment on the $2,000 a month that he spends on Facebook ads. “I’m chomping at the bit to get started,” Bustillo said of the upcoming Accord campaign. 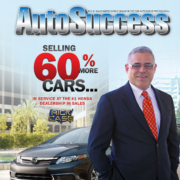 Rick Case Honda sells 60% more cars in the service lane at the #1 Honda Dealership in the U.S. for profitability. 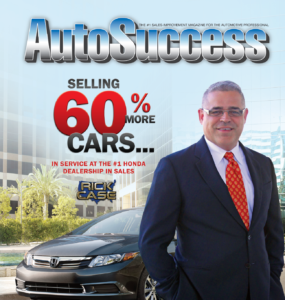 Many dealers face the ongoing challenge of how to effectively reach the right customers with the right message, bring those customers into their showrooms and service bays, and keep
them coming back again and again. As consumer behavior patterns have changed in recent years, so has a dealer’s ability to attract and sell customers. The effectiveness of traditional
mass marketing, TV, print and radio, has waned and given way to more successful marketing efforts that combine highly targeted traditional and digital components that include direct email and mail, internet, mobile applications and more. Dealerships that do not understand these targeted traditional and digital mediums and how to successfully integrate them continue to see diminishing returns with mass marketing which remains costly and nearly impossible to measure.

The most successful dealers are using targeted and digital mediums that are less expensive, more measurable and give a better return on investment than traditional mass marketing. The key to their success is integrating all their targeted traditional and digital advertising to maximize results, but this can also present a challenge as the average dealer works with multiple vendors to execute their entire marketing strategy which results in different strategies, messages and designs that too often are not integrated with one another. One innovative and extremely successful dealership, Rick Case Honda of Davie, the No. 1 Honda dealership in the Southeast and No. 3 for Honda nationally YTD, has taken things to the next level. They are not only integrating multiple marketing mediums to effectively attract, sell, service and retain more customers with one marketing partner to execute their strategy, but they are selling customers right inside their own service bays – you can’t get much more targeted and effective than that.

“We’ve increased sales in service by over 60 percent since launching this initiative back in November 2011,” said Richard Bustillo, General Manager of the Davie store. “We went from selling 45 units to 105 units per month on average.”

Their integrated strategy included many steps that began with a comprehensive five-year historical analysis of their sales and service transactions to determine customer trends. Those
findings were then compared to leading third-party and industry data to establish consumer patterns within their local market. “Our retention rates and gross profit numbers were already
good and we were already mining our own customer base, we just weren’t expanding it. I wasn’t satisfied because I saw an opportunity to do both,” said Bustillo. The results of their assessment enabled Rick Case Honda to identify vehicle owners with the greatest probability of buying or servicing with their dealership, as well as identify same brand owners who had never visited Rick Case Honda, and off-brand owners with a historical pattern of crossing over to Honda.

In order to survive the past four years, the entire industry had to rethink the way it conducted business. Not only was customer traffic down but with the tsunami hitting Japan, inventory levels were at an all-time low. At Rick Case Honda, they knew that in order to grow their business they had to concentrate on meeting their customer’s needs.

“The approach has to have a real benefit for the customer or you will not enjoy prolonged success” said Richard Bustillo, General Manager of Rick Case Honda who has been with the dealership since 2008. “The problem that our service department was facing over the last four years was that although we had an increase in revenue and hours per RO, we were mining our own customer base but not expanding it. I wasn’t satisfied because I saw an opportunity to achieve both.”

They tried investing in conventional email blasts, mailers, and service reminders that targeted current customers and realized that they were not getting their return on their investment. Last November, Bustillo made the decision to change the strategy. The results, he says, were staggering. In November of 2011, Bustillo teamed up with Budd Blackburn, owner of Team Velocity and brought the marketing company onboard with Rick Case Honda. The strategy of Blackburn’s company revolves around conducting comprehensive research that targets the right customers, thus preventing dealerships from sending irrelevant coupons and offers to the wrong consumer.